In Science this term, the children learnt about day and night. The children conducted an experiment to help them understand why we experience daytime and night-time on  Earth. They used a globe and a torch to make predictions about day and night in different countries around the world. Children also observed and explored, through the use of a scientific model, the position of the Sun and its physical effect on light and shadows.

This term year 5 took part in pedestrian training! The training reinforced some of the key messages from the Green Cross Code and the children thoroughly enjoyed practicing how to cross the road safely. The main message was, ‘STOP, LOOK, LISTEN and THINK’ before crossing the road.

Over the last few weeks, Year 5 have been studying extracts from a book called 'Viking Boy' by Tony Bradman. The children have enjoyed their Guided Reading Lessons tremendously. This book has left them on the edge of their seats (there were many cliff-hangers to leave them wanting more!)

We explored the texts in-depth, whilst improving vocabulary and developing retrieval, inference and summarizing skills. We also discussed the language choices made by the author.

During the Autumn Term, the children studied the book 'How To Train Your Dragon' by Cressida Cowell.

Hiccup Horrendous Haddock The Third, the main character, was an awesome sword fighter, a dragon-whisperer and the greatest Viking Hero that ever lived.

The book explores Hiccup's struggle to pass the Dragon Initiation Programme with a toothless dragon and fight the Seadragonus Giganticus Maximus before it gobbles up every Viking on the Isle of Berk. It was time for Hiccup to learn how to be a hero.

The children had fun studying this text and produced some excellent writing along the way!

This term the children have work really hard to produce these amazing Viking Longboats. The children learnt a variety of new skills using a variety of medium. They also learnt about how the long boats were built and how they were used by the Vikings to invade and raid other countries, including Britain. 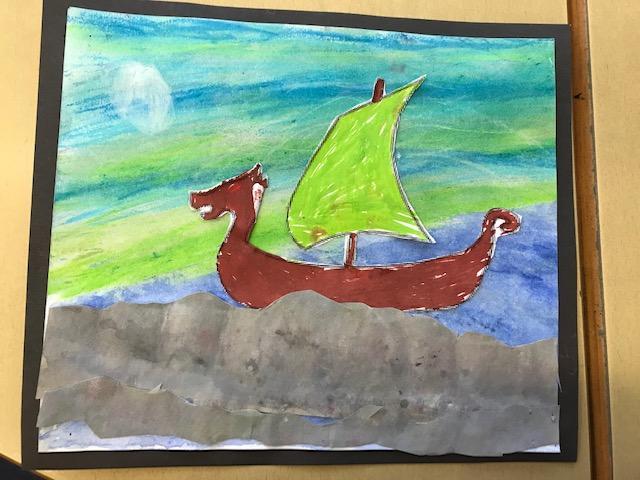 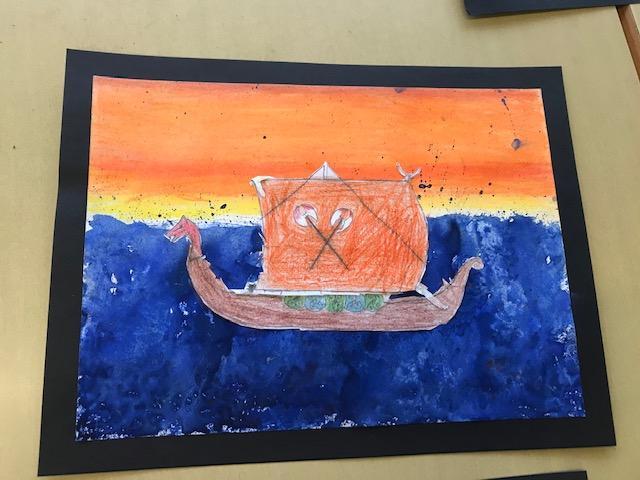 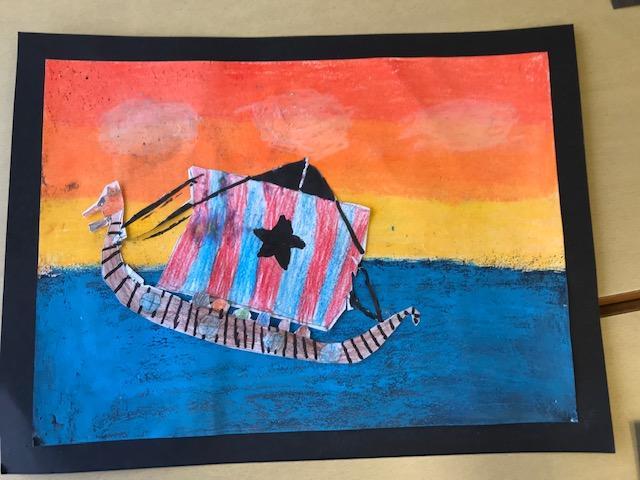 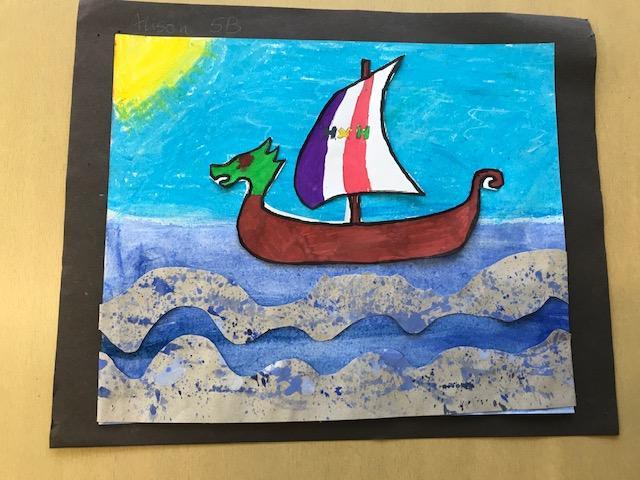 Mrs Banga has been running a Year 5 Art Club this term. The children have worked extremely hard to create these amazing autumn themed pictures using various art techniques. They are really enjoying the sessions.

On Tuesday 30th November, Year 5 had an exciting Viking Day.

Everyone dressed up as Viking warriors and all our activities for the day were linked to the Vikings. The children learnt about the famous Viking Raid on Lindisfarne – where the Vikings crossed from Scandinavia to Northumberland and stole many riches from the monasteries. This left the monks at the mercy of the ruthless Viking warriors! The children looked at a variety of both primary and secondary sources to discover what happened.

In Geography, the children learnt about the physical and human features of Scandinavia and made comparisons with areas of the United Kingdom. The children made colourful shields using a variety of materials and also explored Viking names.

During the day, we also learnt about the ‘Viking Runes’ and wrote messages to each other using the runic alphabet.

Following on from our Viking Day, Year 5 are now very keen to delve even deeper into this fascinating period of British history.

On Thursday 9th December 2021 our Year 5 pupils went to the Science Museum in London. The London Science Museum is an interactive and interesting museum that provides opportunities for exciting learning experiences outside the classroom.

The aim of this trip was to re-inforce  what pupils have  learnt in Science about 'Earth and Space' by looking at the planets as well as developing their knowledge and understanding  of our current Science topic on 'Forces'.

Children  also attended the 'IMAX Experience' where they learnt about Antarctica in preparation for our Spring Topic - 'Journeys'.

In  D.T, Year 5 pupils used a traditional Viking recipe to make oatcakes. They mixed flour, oats, eggs, butter, cinnamon and honey together and then cooked them in the oven. Vikings would have only made them on special occasions as ingredients were expensive. They tasted lovely and the children had great  fun making and eating them. They wrote a short evaluation of their oatcakes, commenting on the taste and what they could do to improve them.

This Term, Year 5 are very excited to begin our new topic on ‘Journeys’. Our first destination is Antarctica. We have started to learn about the famous explorer, Shackleton, and his amazing adventures whilst trying to reach the South Pole. Our key texts are ‘Ice Trap’ and ‘Shackleton’s Journey’. We are focusing specifically on his final expedition on the ‘Endurance,’ when the ship became trapped in an ice floe with many disastrous consequences.

Shackleton’s  party were forced to spend two long and difficult years on the ice but every one managed to survive and get back home safely. Over the next few weeks, the children will be producing lots of super work based on  this topic.

Shackleton's Journey is a unique, photographic account of Ernest Shackleton's landmark expedition crossing the Antarctic from one pole to the other. A remarkable book, and a harrowing story of bravery, endurance and hope!

Ernest Shackleton dreamed of crossing Antarctica, a place of frozen seas, unchartered mountains and bone-chilling cold. Shackleton’s dreams become far from reality when Endurance gets trapped in the deadly grip of the ice. Standing in a cold, white world, and thousands of miles from home, Shackleton and his crew set out on a desperate journey across the ice in pursue for help. Will they survive?

Shackleton's Journey is a unique, photographic account of Ernest Shackleton's landmark expedition crossing the Antarctic from one pole to the other. A remarkable book, and a harrowing story of bravery, endurance and hope!

Ernest Shackleton dreamed of crossing Antarctica, a place of frozen seas, unchartered mountains and bone-chilling cold. Shackleton’s dreams become far from reality when Endurance gets trapped in the deadly grip of the ice. Standing in a cold, white world, and thousands of miles from home, Shackleton and his crew set out on a desperate journey across the ice in pursue for help. Will they survive?

Year 5 children have shown great enthusiasm for their swimming lessons and have conducted themselves brilliantly throughout these sessions. 5B and 5M have participated in a two-week intensive course at Botwell Leisure Centre where pupils were taught swimming and water safety by a qualified instructor. Pupils learnt many skills including, how to move in water (for example, jump, walk, hop and spin, using swimming aids and support), float and move with and without swimming aids, swim unaided for a sustained period of time over a distance of at least 25 metres and use a range of recognised strokes and personal survival skills (front crawl, back crawl, breaststroke). 5S and 5R will also be attending swimming lessons during the summer term.

Our school is a Rights Respecting School, which means that we believe that EVERY child has rights so they can be happy, healthy, well-educated and have their views listened to.  We have been busy creating our class charters! A class charter is a set of rules, promises or guidelines that children and teachers have all agreed on for the classroom. They are created to help children understand that they have certain rights in the classroom. These rights are important, as they help to keep them safe and happy while they receive their education. Each class has a Rights Respecting Ambassador. Jathees Suthan is the Rights Respecting Ambassador for 5S!

This term the children have been learning about the key structural and language features of persuasive writing. We analysed several persuasive letters and  learnt about persuasive techniques and emotive language. We then planned and practiced writing a persuasive letter using these key features. Finally, we all wrote letters to 'Ernest Shackleton' to apply for a job on his 'Endurance Expedition.' We learnt about the different jobs on board and the skills that would have been required. The children enjoyed writing their letters and have convinced their teachers that they deserve to be employed!

This term children are developing their conceptual knowledge and understanding of ‘Properties and changes of Materials’. They have learnt how different mixtures of solids might be separated. They have learnt that certain solids dissolve while others do not, and discussed how these dissolved solids might be retrieved from a mixture. Conducting a variety of experiments in class, the children have also explored how the rate at which solids dissolve can vary, investigating variables that might make a difference. They have then tested a variety of solids (solutes) and identified those that dissolve and those that do not. Some have also investigated a variety of solvents and the saturation point of dissolved solids in water. The children have used their knowledge of mixtures and solutions in solving a number of real world-based enquiries, which require them to apply their growing subject knowledge to an unusual context. Children used specific scientific vocabulary as they described, explained and communicated their understanding of materials, succinctly and in ways appropriate to a science context.

Our key text this term is 'The Explorer' by Katherine Rundell and we are on the edge of our seats waiting to find out what will happen next! The book begins with a dramatic event: four children are travelling in a light aircraft across The Amazon Rainforest, which then crashes.

They are forced to pull together as a team in order to survive. The themes within the book are set around survival, perseverance, an appreciation of the natural environment, friendship and love. This book takes us to the rainforest, which links with our creative curriculum topic where children are learning about The Amazon Rainforest and its ecosystem.

During our topic on journeys the children  learnt about the life and work of Neil Armstrong. They  researched his life as a child, his exploration of space and his final years. The children then wrote some amazing biographies which were displayed in the year 5 classrooms for every one to read.

Pupils in year 5 are currently learning about South Africa. Our key text this term is  Journey to Jo’burg by Beverley Naidoo whic is a fantastic, thought-provoking story that covers themes such as  diversity, equality and acceptance. This story is about a brother and sister’s journey through South Africa during Apartheid, in a race against time to find their mother thereby saving their poorly baby sister, Dineo. Frightened that their baby sister will die, 13-year-old Naledi and her young brother Tiro run away from their grandmother to find their mother, who works in Johannesburg as a maid. Their journey shows the realities of apartheid (a system set up through legislation to keep its society racially segregated.) The majority of people in South Africa were black, but they were treated as second-rate citizens who could not aspire to more than being the servants of those in power.